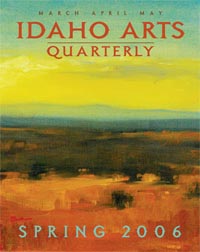 Artists played a key role in the opening of the West to American expansion. The paintings they brought back to the east were filled with grand skies, open plains and majestic mountains. Before the age of photography, these were the only images that represented this new territory, the frontier. Today, art doesn’t play the same role as it once did, inspiring populations to go see a fresh land for themselves. Landscape painters have become a rare and endangered species. Those artists still around today continue to document the landscapes of western regions, but more often than not, they are chronicling the disappearance of those lands.

Boise artist Fonny Davidson is one such artist. His work, while rooted in an earlier time, documents changes to the surrounding land have occurred over during his life. Davidson’s is a body of work that took a lifetime to create, and only when compared to other works–taken out of their chronological time frame–can one appreciate the true value of returning to the same spot, year after year, to paint the same land that has been there for millennia.

Davidson’s ties to this region are deep. He was born in Wenatchee, Washington, where his mother’s family dates back to the mid-1800s, about the time that part of the country was first settled by westerners. His father, born in 1877, was a blacksmith on the western side of Lolo Pass in Idaho and repaired and prepped wagons making the difficult journey across the border. During the 1940s, Davidson grew up on a farm in Marsing, Idaho, but moved around the northwest for many years. After returning to Idaho in 1965, he attended Northwest Nazarene College, where he received degree in English, teaching and art. After teaching English in the public system for 10 years, he also worked as a commercial fisherman, where two months of hard labor allowed him to make enough money to paint at home the rest of the year. Davidson says that he has been focusing on art as his full-time career for the past 22 or 23 years.

When he undertook his art career in the 1960s, Davidson says there wasn’t any art scene to speak of in the region, “But I was too young and naïve to know that.” He had been accepted in to several masters programs, but decided not to attend, preferring to strike out on his own. He is not one to go to a lot of workshops either, but he gives nods to many artists who have influenced his works. He credits his main influence, Del Gish, whom he considers a mentor. “He gave me my foundation and taught me to paint,” Davidson says.

Davidson wasn’t always a painter. While he began his career with painting, he also dabbled in ceramics and then sculpture before returning to painting in the early 1980s. Over the years, his sculptures have graced the grounds of Northwest Nazarene, and some of his works were in the running for the front of Boise City Hall. Today his garden in a West Boise neighborhood contains some of his metal works and inside his studio there are several wood models for larger works. 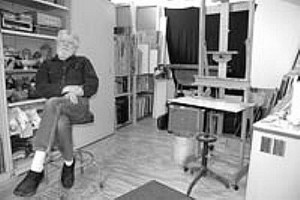 “I try to do something art-related every day,” he says. But that may not always involve painting. “There’s a certain amount of mental fermentation that needs to happen. There’s something to be said for taking a vacation, too.”

For many years, his preferred method of painting was en plein air, a French expression meaning “in the open air.” He still continues to do quite a bit of plein air paintings, often packing his paints, easel, brushes and materials–in plein air boxes he made himself–to a specific location, sometimes the same places he has painted many times. Davidson’s skill comes from a 40 years of experience, and at times he can finish one or two works in a day.

“To be a good traditional painter is not as well known as it used to be,” he says. “Most [artists] don’t go through that exercise, that training to do it. Most schools don’t teach it. Most people can’t recognize the subtleties. Today’s art has equated pushing the boundaries of art with being ‘good’ or ‘bad.'”

One of his favorite areas to paint is Barber Flats, just east of Boise, a spot that he has been documenting in his landscapes for years. While he hasn’t been out there in over a year, every time he returns, more development has occurred and more land has been eaten away by growth and urban sprawl. When looking at these works, one can see subtle changes in the land, the impact of humanity on a fragile world. Bonneville Point is another such favorite place. It is the location between Boise and Mountain Home where the Oregon Trail passed. His recent works of Bonneville Point have an airy quality, still capturing the essence but becoming more impressionistic in nature.

Davidson’s work also contains quite a bit of still life subjects. He used to focus on landscapes or still life paintings for a period of time, then return to the other. He would also limit himself to the same size canvases, a small palette of colors and one or two sizes of brushes. He paints an onion simply, with the same limited color palette he tends to use on his landscapes. These self-imposed limitations helped him master his tools and technique. He believes “it is essential for a person who has not developed technique to limit themselves. If you limit yourself to the same size format, then you don’t have to figure out how to fill the space every time.”

Today, while he may alternate between the content of his paintings more frequently, his palette, size of canvases and brush selections haven’t diversified much. Davidson says, “Content is more important than technique in some ways. I try to find content that resonates with who I am. Who in the hell are you as a person, or what can you do to express that?”

While he doesn’t go out in the field as much as he used to, Davidson says it was an important part of his artistic development. “When out painting, the sun demands you work fast, because the light changes,” he says. “Now I get out less, but I get more material.” He does some work from slides projected onto the wall in his studio, but years of plein air painting taught him what nature looks like and he relies on that.

“One thing I’m working on is to get a sense of the Western landscape–being part of the landscape, trying to assimilate what is there, being owned by it. The symbiotic relationship, that’s something I deal with all the time,” he says. “In a way, I’m dealing with the archetypal Western ideal, the dilemma I’m dealing with [is] that our modern life is so divorced from living in the landscape. That’s probably the main motivation.”

He holds up a Navajo blanket, made early last century. “This is their way of expressing who they were and who they are,” he says. “They did it intuitively. They didn’t go through the crap of intellectualizing their work. But once they started doing these for sale to the gringos, their work became polluted. Their motivation for doing them changed. The end product eventually changed as well but it was their basic tools to add spiritual content to their lives. That’s why being tied to these landscapes is so important.”

He recalls that the first gallery to show his work was the Fritchman Gallery but he has been with Stewart Gallery for the last 18 years, represented by Stephanie Wilde, whom Davidson labels the “Grand Dame” of art in Boise. But that isn’t the only place to see his paintings. Davidson’s work is all around town, in the lobby of Idaho Power, in professional offices and gracing the walls of many of Idaho’s private homes.

But for all his shows, sales and successes, Davidson’s thrill in his craft remains. His painting is a spiritual experience for him.

“When I’m out painting, I’m at my most primeval place. I get the most out of it,” he says.

Listen to a Jyl Hoyt interview with Fonny Davidson from “Art Beat” on NPR at Boise State University radio.